“…the mares galloped across the white mist that lay like fresh snow, up and into the sky.
Their hoof prints and their echoing whinnies blazed a pathway to the stars”
~ Dawn Van Zant

Sometimes Night Mares can be Beneficial

In November 1997 the owner of a Canadian company called Wild Heart Ranch contacted me. Dawn Van Zant asked me if I was interested in doing a project illustrating artwork for a new plush horse toy and storybook called “No More Night Mares”. Intrigued, I said I’d like to hear more.

Two years before, Dawn had composed a bedtime story for her eight-year-old daughter, Callan. The story was about an ancient herd of wild horses. The story is set in an early time when horses were first being captured and tamed by mankind.  Two-legged hunters pursue a band of wild horses. The stallion Eclipse, and his three mares named Moonbeam, Comet and Lucky Stars, narrowly escape capture by magically transforming into spirits. They leap from a cliff into the the night sky to become one with the stars in the Pegasus constellation. Ever after their spirits remain shining as symbols of freedom and protection for all horses, both wild and domestic.

Dawn and her daughter came up with the idea of creating plush horses based on the three mares. The toys featured a unique night-light for the blaze of each mare as a symbol of their celestial heritage. This light was activated by the child pushing a switch in the toy horse’s hoof so the light provided comfort and security enabling the child to light up their own dark night. 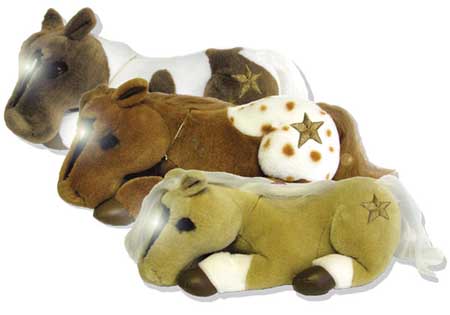 It was Callan who had insisted her mom contact me as the artist to illustrate the story. She had been collecting my Leanin’ Tree Greeting cards for years. When her teacher had assigned her the task of a book report about a famous artist – instead of choosing Rembrandt or Degas, she had chosen me!

The Inspirations for the Artwork

“If you look far beyond the Big Dipper, past Polaris to the Pegasus Constellation, you will find these missing horses shining brightly. The luminous mares of a once noble herd prance across a blanket of black sky. They are the “Night Mares”, strong, wild and free! They dream of a time long ago when the land was filled with wild horses thundering across vast plains. Their stars light up wishes, for a day when they will be able to run free with the herds below and bring the legend and magic to life!”
~ Dawn Van Zant

When I read the “No More Night Mares” story, I was inspired by the mystical and symbolic significance of Dawn’s themes and I felt a kinship with her vision. I had always wanted to do a work of art depicting horses in the Pegasus constellation. The concepts for the artwork immediately started to appear in my imagination in complex detail. All of these were sign to me that these paintings were meant to be.

“The new stars in the galaxy shone rays of magic that filled the land below.
Beams of light from their wild hears traveled through space and time
to ensure that the legacy of wild horses would not be forgotten.”
~ Dawn Van Zant

Every aspect of the project seemed to be blessed from the start. Despite the complex nature of the art, the models for the horse characters miraculously appeared when I needed them. At my local boarding stable I found a paint with a comet shaped blaze, and an appaloosa who’s spots I could make into stars. I also knew of a liberty trainer that had both a chestnut and a black stallion. He had trained them to rear so I had the perfect study for the way I envisioned their painting. For the Palomino, Moonbeam, I chose a mare I had painted before named “Dolly”. All of this timing was critical because I only had six weeks to complete six paintings!  I also created paintings of a comet, a star, and a crescent moon to illustrate the night light blazes of the horses.

“Eclipse called Moonbeam, Comet and Lucky Stars, his fastest mares, to his side.”

“Flying Wind taught everything he knew to Eclipse. He believed one day he would replace him
as a great stallion, defender of the wild herd” 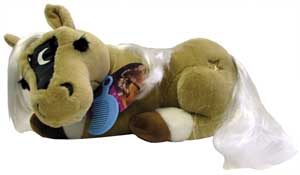 Moonbeam and her blaze

“One of the greatest dangers the wild herd faced was Man, the two-legged hunter.
Chasing down a dream of freedom, man wanted to tame the elusive animals that could run like the wind”

The Meaning of “The Legend” Artwork Becomes Exponential

In addition to the toy line and the subsequent storybook release, the symbolic aspects of “The Legend” painting inspired its popularity as a Leanin’ Tree Greeting card and poster with the sentiment “When we believe in our dreams, they carry us to the stars”. Subsequently, “The Legend” was also chosen as a sympathy card. The vision of horses going up to into the stars spoke to many of the eternal nature of all souls.

Ten years after its creation, “The Legend” was also chosen to represent “The Horse Ancestors” in the book and card set “The Way of the Horse ~ Equine Archetypes for Self-Discovery” that I co-created with renowned author Linda Kohanov .  Linda writes of the Horse Ancestors as “the equine collective mind” and “the wisdom that gives rise to the form of the horse”.  To her this artwork can also be seen as a way of expressing “the ability of horses to connect with the cumulative knowledge and memory of their own species.”  In Linda’s essay, the Key Phrases of the Card’s meaning is interpreted as “Species Wisdom, Collective Memory, and Ancestral Patterns Affecting Current Events”

The idea that started with Dawn’s vision of wild mares ascending to the stars inspired a work of art that has spoken to countless people of the powerful equine spiritual connections within our souls. Though the toys are no longer available the book with my illustrations is still sold through Amazon, I believe the story continues to shine just as the stars do. Just as the Night Mares continue to watch over their earthly kin.

Hello and welcome to my blog. I love the opportunity to share more about the inspirations behind my art.

The days have changed from when I exhibited my art around the country at major horse events, and now the experience of my art is mostly virtual. I don't miss the travel, but I do I miss sharing the personal touch with my fans that makes my art so meaningful.

Some of my blog stories include works in progress along with my insights about art and the subjects that I paint. Others explore my philosophical musings behind the creative process itself. I hope you will take a moment in the midst of your busy day to enjoy my blog and that it inspires you in your love of horses or your own creative journey.

Please sign up to receive notifications of new Spirit of Horse Blog postings. I invite your comments on my writings and art so I can feel connected to your through this in this virtual experience.